New Orleans, LA — Twin sisters Jordyn and Morgan Jackson, who are only 20-years old, have both graduated college early from Xavier University in Louisiana.

Since they were little girls, the twins have always accomplished things together. At the age of 17, they graduated at the same time from North Houston Early College with both a high school diploma and an Associate degree.

Jordyn’s childhood dream was to be a lawyer. But after doing some research, she decided to pursue a career in accounting instead. During that time, she also became a resident assistant, an INROADS scholar, an executive leadership council scholar, and a member of AICPA. She has also interned three times with PwC, a Big Four accounting firm.

“I want to continue to increase the pipeline of Black CPAs because it’s less than 3%,” Jordyn told Black Enterprise. “That’s my why and my drive for doing what I do. I want to show young Black girls and boys that there are other career options out there. Accounting is a great profession.”

On the other hand, Morgan, who has since loved speaking, decided to pursue a career in mass communication. She was even more motivated by her mother’s own experience of the same major at Grambling State University. At the same time, she also became a member of the National Pan-Hellenic Council (NPHC) and the National Millennial & Generation Z Community. Morgan has also been a published writer and a Marketing & Communications Specialist for the Center for Minority Health & Health Disparities Research & Research at Xavier’s College of Pharmacy.

“I chose the strategic communication route,” Morgan said. “In the future, I want to work with companies and brands to help them design and execute community engagement strategies that really enhance their brand appeal and make them resonate with marginalized audiences.”

More than that, Jordyn and Morgan are both members of Alpha Kappa Alpha Sorority, Inc. Both of them received Dean’s list and honor society recognition.

Nationwide — Meet Kishanna Heyward, the author of Credit is King, Kareem and Credit is Queen, Charlene who was inspired to create a credit... read more

Ghana — Audrey Maame Esi Swatson is the youngest female commercial pilot in the country of Ghana, having obtained her... read more

Nationwide — It’s not about who you see in front of the camera anymore, it’s about who’s doing business behind... read more

Samarria Dunson and Lloria James are making national headlines after they both recently became judges in Montgomery, Alabama. This... read more 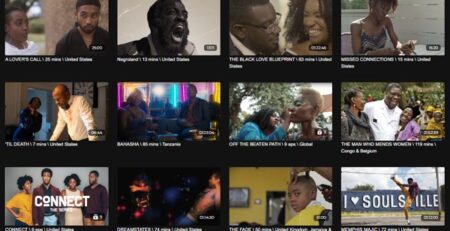 kweliTV, a Black-owned streaming service, has entered a distribution partnership with California Newsreel to stream the organization’s robust African content. Through... read more

The BOSS Network has partnered with Syreeta Talbert, a certified tax preparer, and the PPP Second Chance Program to... read more

RoseMary Tucker, founder of Blessties USA and the Hoodies4Healing Foundation, is hosting a Blanket Drive for the homeless for... read more

Kimberly Cloud, the founder of one of the fastest-growing Black-owned cleaning companies in Pennsylvania, is on track to become... read more